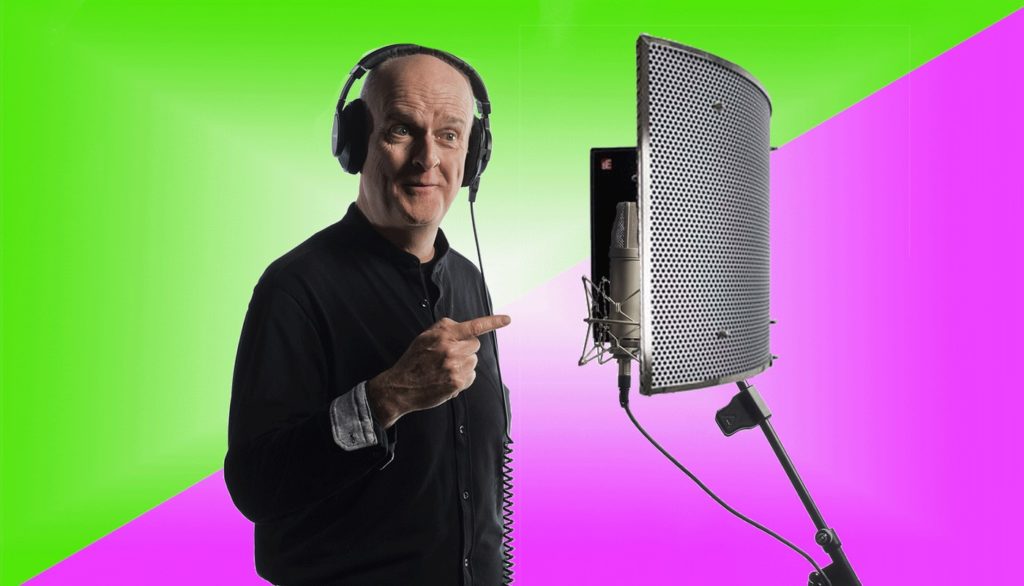 The question “Do I need a sound reflection filter in my home studio” is often asked to us in our mentoring area at Gravy For The Brain. This blog will provide a definitive answer to that question!

What’s the Point of a Home Recording Studio?

The point of a home recording studio is to provide a stable, repeatable recording environment with no sound ingress and no sound egress, while minimising any unwanted noise/sound reflections going into the microphone.

What does all that mean!? Let’s go through them one by one:

…The aim is to remove all sound reflections altogether so that we just get your pure vocal into the mic and that only.

So what do we do? Well, we build a recording booth, or a recording studio, or we adapt an area of the house/garage/cat bed to become our recording area.

For a complete rundown on how to do this, you can see our full Home Recording Studio course, and also the recording of the How to Build A Home Studio webinar, all available to our members.

Great – How Do I Filter Out Those Unwanted Sound Reflections?

(By the way, just in case there are any crazies reading this, please do not create a booth lined with cats. We will report you to an animal cruelty association.)

A picture tells a thousand words, so here are a couple of pictures of popular reflection filters… 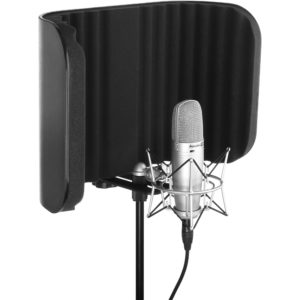 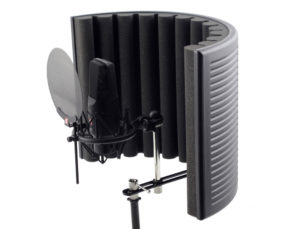 You will note the mic placement – the mic is roughly placed in the centre of what would be the diameter if the filter were a complete circle.

Here’s the thing with reflection filters; you voice into the front of the mic, and the idea – in fact the whole basis of sales of these items – is that the unit filters out the unwanted reflections, thus making the recording area sound sweet.

This however, is not true.

“They look like they will filter out unwanted reflections! They have sound-proofing material on the inside of them, and they are blocking out a large proportion of the area around the mic! So why is this not true Hugh? Why? WHY?” I hear you scream into the ether…..well, please allow me to explain…

First I need to tell you about microphones.

The Key To The Argument: The Microphone Pickup Pattern

There are several different polar pickup patterns on the modern microphone. Most microphones are in some way directional, in that they pick up audio better in one direction than another. Some mic’s pick up from a very specific point that you have to aim the mic at, some pick up from everywhere around it. Some mic’s can do all of the above. A polar pickup pattern is the area or the space that these different mic’s pickup from, relative to the front of the mic (which is represented by a dot or logo on the mic itself.)

Some mic’s, such as the Neumann U87 (see our exhaustive microphone breakdown) have the facility to switch between Omni, Figure of 8 and Cardioid so you can change it’s pickup pattern based on your current mic use, but most mic’s are just set as cardioid as standard.

Why would we want to use cardioid for voice recording? Because we want as few sound reflections in there as possible – if we had the pattern set to Omni, (picking up from everywhere), it would pick up way more of the room noise, and our recordings would be much noisier. Having the mic set to cardioid means it restricts what is picked up, i.e., just the area where we are positioned, and the recordings are less noisy.

Let’s have a look at what the cardioid pickup pattern looks like in reality: 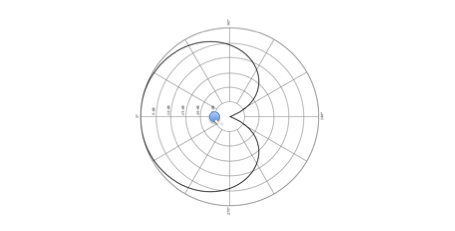 This is a plan view, i.e., from above the mic. The mic is the circle in the centre, and the small coloured dot is the front of the mic. You can see that the pattern looks a little bit like a heart shape, hence the name, Cardioid. Now to give that some perspective, let’s put in you, the voice artist: 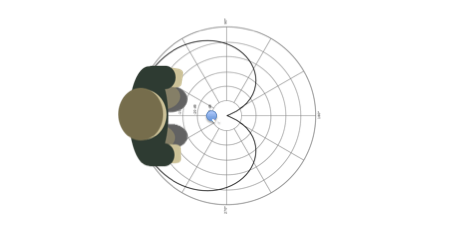 You can now see that the cardioid ‘bubble’ is the area where our dialogue is being spoken and it’s picking up from that direction only. Do bear in mind however, that this ‘bubble’ exists not just in a 2D plane, but in a 3D plane, so from a side view, the pickup ‘bubble’ looks like this: 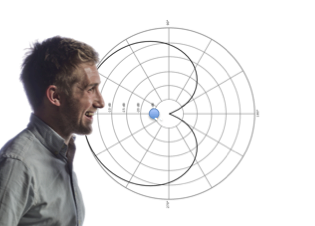 Yeah, Yeah, So Do I Need A Reflection Filter Or Not!!??

Patience! Relax! Be Zen! We are nearly there…

Let’s carry on with our pictures for a moment. Let’s add into those pictures a representation of the sound reflections we mentioned earlier, bouncing from the walls of the kitchen, the ceiling, the cat-flap. The sound reflections come to the mic from 360 degrees like this: 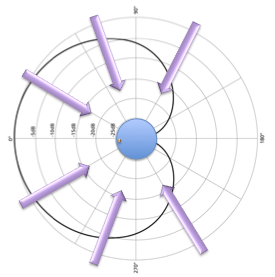 You can clearly see that although the reflections are coming in from all angles, the mic is only picking them up from within the cardioid pickup pattern….only a tiny bit from the sides of the mic, and almost nothing from the back of it.

And now, let’s add in our Reflection Filter, like this: 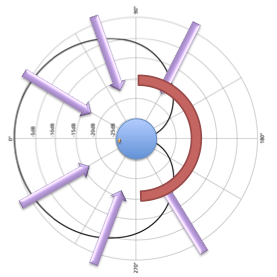 ..and then let’s put our voice artist back in, like this: 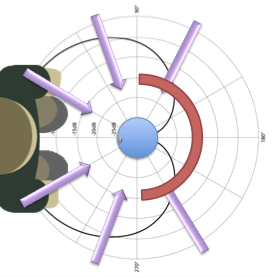 So, Finally, Do I need a Reflection Filter?

No. you do not. They are a waste of time and money.

Unfortunately, inexperienced VO’s, or less educated VO’s, or let’s be honest about many of us, less studio technically-minded VO’s, buy reflection filters because they see other people use them, because they see pictures of them in marketing gumpf, because someone who has one advises them to etc. But save your money. They don’t work.

Can they hurt the process? No – it can’t hurt it just doesn’t help.

Well If I Don’t Need A Reflection Filter, How Do I Make My Recording Sound Good?

Here’s the news you may not what to hear – but it’s the truth. You have to spend the time, effort and some money creating a sound-treated space to record in. That can be a booth, that could be a home made unit, that could be a space adapted to become a recording area – it just can’t be an untreated office. It can’t be a untreated kitchen. It can’t be….well, we’ve said enough about the poor cat.

That though, is an entire subject in it’s own right – check out the How to Build A Home Studio webinar in the members area which will tell you all you need to know on the subject of setting up a home studio recording area.

I hope that helps! Now, go stroke your cat.